This department has programs that are eligible for 100% tuition coverage.

NGTC’s Emergency Medical Services (EMS) program prepares students to provide emergency medical care and transportation for critical and emergent patients who access the emergency medical system. EMS professionals function as part of a comprehensive response team, under medical oversight, and are a direct link from the scene to the emergency health care system. These individuals are tasked with performing medical interventions with the basic and advanced equipment typically found on an ambulance. Students earning the Advanced EMT (AEMT) Diploma are prepared to move fluidly into training to become a Paramedic at the diploma or degree level.

In compliance with the Committee on Accreditation of Educational Programs for the Emergency Medical Services Professions (CoAEMSP) the following outcomes were reported in the 2020 Annual Report:

Employment of EMTs and Paramedics is expected to grow 11 percent between 2020 to 2030, faster than the average for all occupations.  About 20,700 openings for EMTs and paramedics are projected each year, on average, over the decade. Many of those openings are expected to result from the need to replace workers who transfer to different occupations or exit the labor force, such as to retire.  As a large segment of the population (aging members of the “Baby Boomer” generation) becomes more likely to have medical emergencies, demand will increase for EMTs and Paramedics.  This need is intensified by the medical professional shortage that has continued to increase.  Career opportunities are available in metropolitan areas as well as smaller cities, towns, and rural areas.  Many EMTs and Paramedics work on an ambulance divided between private services, fire departments, third service agencies, air medical service, and others.  Over half of the current EMTs and Paramedics work in non-ambulance environments such as hospitals, local, state, and federal governments, cross trained public safety members, the movie industry, and other industrial settings.

The most advanced level of training for emergency medical services professional paramedic. At this level, the caregiver receives training in anatomy and physiology as well as advanced medical skills. Most commonly, the training is conducted in community colleges and technical schools and may result in an associate’s degree. These programs may take up to one to two years. Such education prepares the graduate to take the NREMT examination to become certified as a paramedic. Extensive related coursework and clinical and field experience is required. Refresher courses and continuing education are available for EMTs and paramedics at all levels.

Paramedics provide more extensive pre-hospital care than do EMTs. In addition to carrying out the procedures of the other levels, paramedics administer medications orally and intravenously, interpret electrocardiograms (EKGs), perform endotracheal intubations, and use monitors and other complex equipment. However, like the AEMT level, what paramedics are permitted to do varies by state. EMTs and paramedics work both indoors and out, in all types of weather. They are required to do considerable kneeling, bending, and heavy lifting. These workers are at a higher risk for contracting illnesses or experiencing injuries on the job than workers in other occupations. They risk noise-induced hearing loss from sirens and back injuries from lifting patients. In addition, EMTs and paramedics may be exposed to communicable diseases, such as hepatitis-B and AIDS, as well as to violence from mentally unstable or combative patients. The work is not only physically strenuous but can be stressful, sometimes involving life-or-death situations and suffering patients. Nonetheless, many people find the work exciting and challenging and enjoy the opportunity to help others. These workers experienced a larger than the average number of work-related injuries or illnesses Many EMTs and paramedics are required to work more than 40 hours a week. Because emergency services function 24 hours a day, EMTs and paramedics may have irregular working hours. All 50 States require EMTs and Paramedics to be licensed, but the levels and titles vary from state to state. In most states and the District of Columbia certification by the NREMT is required at some or all levels. Some states administer their own certification examination or provide the option of taking either the NREMT or state examination. In most states, licensure renewal is required every two to three years and generally, EMTs and paramedics must take refresher training courses or complete continuing education requirements.

Credentials You Can Earn

The Paramedicine applied associate in science degree program prepares students to provide advanced emergency medical care for critical and emergent patients who access the emergency medical system. This individual possesses the complex knowledge and skills necessary to provide patient care and transportation. Paramedics function as part of a comprehensive EMS response, under medical oversight. Paramedics perform interventions with the basic and advanced equipment typically found on an ambulance. The Paramedic is a link from the scene into the health care system. The Paramedicine degree program prepares students for employment in paramedic positions in today’s health services field. The Paramedic degree program provides learning opportunities that introduce, develop, and reinforce academic and occupational knowledge, skills, and attitudes required for job acquisition, retention, and advancement. The program provides opportunities to upgrade present knowledge and skills from the EMT/EMT-I 1985/AEMT levels to a paramedic level. Successful completion of the program allows the graduate to take the National Registry of Emergency Medical Technicians (NREMT) Paramedic certification examination and apply for Georgia licensure with the State Office of Emergency Medical Service and Trauma (SOEMST) as a paramedic. Criminal background checks and drug screens may be required based on the requirements for participation in clinical experiences.

Students who complete the EMS Professions diploma are prepared to fluidly move into the Paramedicine program at the diploma level. Successful completion of the program allows the graduate to take the National Registry of Emergency Medical Technicians AEMT certification examination and to apply for Georgia licensure as an AEMT. The primary focus of the AEMT is to provide basic and limited advanced emergency medical care and transportation for critical and emergent patients who access the emergency medical system. This individual possesses the basic knowledge and skills necessary to provide patient care and transportation. AEMT function as part of a comprehensive EMS response, under medical oversight. AEMT perform interventions with the basic and advanced equipment typically found on an ambulance. The AEMT is a link from the scene to the emergency health care system. Program graduates receive an EMS Professions Diploma.

Successful completion of the certificate, diploma or degree programs allow graduates to take the National Registry of EMT (NREMT) certification examination(s) and to apply for Georgia licensure as an EMT, AEMT or Paramedic.

Students completing the EMT or AEMT program may choose career paths in:

Junior or senior member of a BLS Ambulance crew

Student completing the Paramedic program may choose career paths in:

Additional career options can be researched on the following site(s): 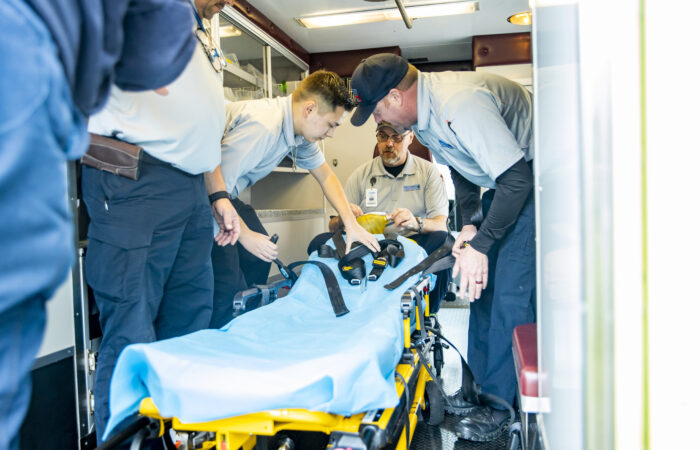